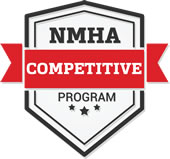 Thank you for your interest in the NMHA competitive program. Given that we missed our regular competitive season last year we thought it may be beneficial to provide parents and prospective players a short outline describing the competitive tryout process followed by the NMHA.

New this year is the implementation of the Hockey Canada Pathways program which applies to players from U9 to U11. As part of this program, players will be given the opportunity to participate in 4 un-evaluated skates prior to the beginning of tryouts.  These skates will take place between September 7 and 10. Times will be emailed to the participants prior to the first ice time.

Tryouts for U12 to U15 begin on August 28th and tryouts for U11 and younger begin on September 11. Once tryouts begin, players will be guaranteed a minimum of 2 tryout ice times depending on the level.  Prior to the first tryouts, parents and players will receive an email indicating which tryout team the player has been assigned to within the player’s age group. Players are expected to be in attendance at the time assigned to his/her tryout team. The initial tryout ice times are posted on the NMHA website at https://nepeanhockey.on.ca/tryout-dates-2021-2022/

If you have any questions, please reach out to the appropriate convenor.  Convenor emails can be found at https://nepeanhockey.on.ca/contact-us/.  We kindly ask that you do not email the head coaches directly.  Thank you and good luck!